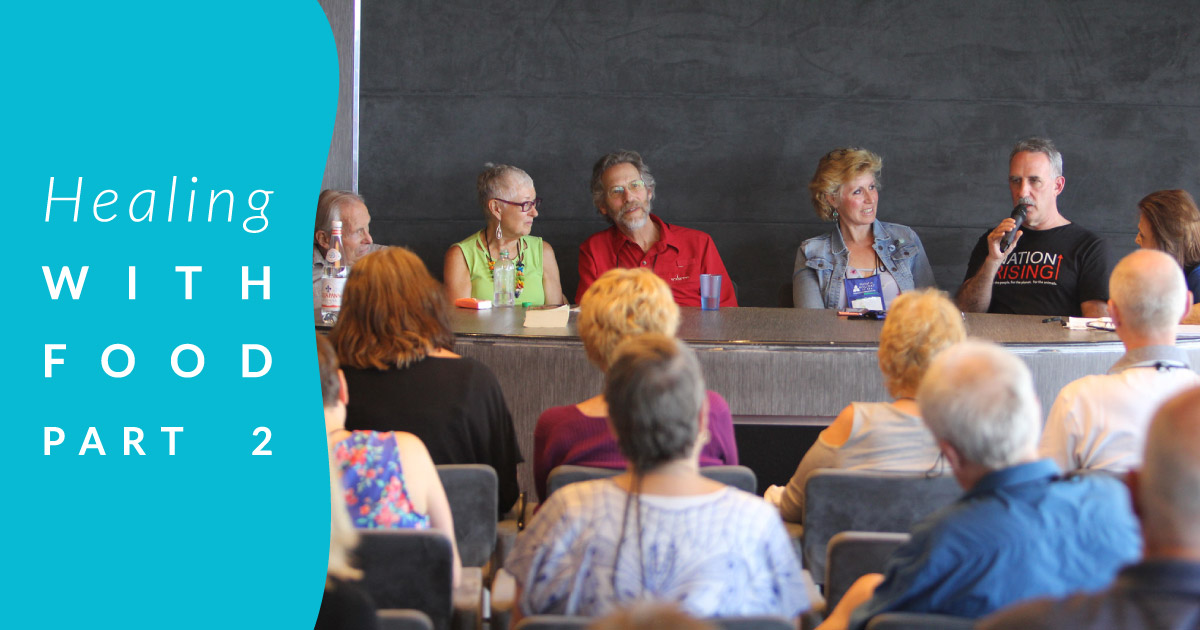 Every year on the Holistic Holiday at Sea, the Recovery Panel is one of our most popular sessions. With courage and grace, participants share personal stories of illness and health, and how a plant-based diet, macrobiotic lifestyle, and holistic wellness regimen contributed to their healing process. This is the second part of a four part series featuring the stories from the Recovery Panel.

About six years ago, Joel Grace was diagnosed with an aggressive form of cancer, stage 3 metastatic melanoma. He was given only a 10-15% chance of survival. He had four tumors in his neck that were secondary tumors, two that had spread. The biggest tumor was five and a half centimeters. He ended up having those four tumors and forty four lymph nodes taken out.

“Hearing that you have cancer is bad enough and hearing that it’s spread is even worse…I did radiation but chose not to do chemotherapy. It was just something that I didn’t believe in. I didn’t want to poison my body. I wanted my body to heal itself.”

Before he was diagnosed with cancer, Joel had a standard American/Australian diet and lifestyle.

“I would think that I was healthy as I was putting half a bag of frozen fries in the oven or frozen pizza. Eating a little handful of veggies and thinking that was healthy. I was on heaps of different medications and I worked a very stressful job. So it’s no wonder that I got sick.”

Upon hearing that he had cancer, Joel decided to change his life and switched to a plant-based diet. He went cold turkey on all his medications and did a green juice fast for the first time in his life. For the first 18 months of healing, Joel ate a mostly raw diet. He drank a lot of green juice, green smoothies, and wheatgrass juice. He did intravenous therapies like high dose Vitamin C and a lot of colonics to cleanse his body.

“The key thing for me to take away from this is that the doctors told me, ‘Don’t bother changing your diet. It won’t work.’ Thankfully, I didn’t listen to their advice.

It seems like a strange thing to say, but I think that getting cancer was one of the best things that could have ever happened to me. I’m now fitter. I’m healthier than I’ve ever been in my life. I’m completely cancer-free.”

When people are about to embark on a similar wellness journey, Joel likes to share a few things.

“I always recommend that people go natural first. The doctors will always be pressuring you to start chemo or radiation immediately. You have time. You have time to do your research. You have 4-6 weeks, which is plenty of time to figure things out. The next thing is to stick to it. You’re not going to get overnight results from just a 10-day fast. The third thing is that different things work for different people, so believe in what you do. Don’t just do what other people have done. Do your research and figure it out for yourself.”

When John went on the HHAS cruise in 2015 for the first time, he had been vegan for five years. He had been exercising regularly for three or four years. He got home from the cruise and within three months he had a heart attack.

At the beginning of 2010, John weighed 260 pounds. When he attended the cruise in 2015, he weighed 159 pounds. After six weeks of being on Joel Fuhrman’s Eat to Live diet, John lost 28 pounds. Nine months later, he had lost 100 pounds. He went to the doctor to have his hormones checked, made some tweaks, and gained energy and positivity that he had previously lacked.

“I had a heart attack in 2015 and the following things happened: I drove myself to the ER. When the doctor walked in and looked at my EKG, he said, ‘There’s no evidence that you had a cardiac event.’ A month later we had an echo stress test. My doctor looked at that and said I suffered no damage. My heart suffered no damage from the event. My wife and I are convinced that if I had not made those lifestyle changes before, that I’d be dead. Thanks to those changes, I’m here today.”

In June of 2013, Terri’s sister had a ruptured appendix. When she went in for emergency surgery, they discovered she had colon cancer. Because Terri had been struggling with reflux problems, she had an appointment the next day and her doctor told her that she needed to get a colonoscopy.

“Because I was healthy, I didn’t think I needed to get one, but the doctor said, ‘You don’t understand. Your sister has colon cancer and if it’s genetic, it’s a 50% chance that you have it too.’ So I had a colonoscopy and I was shocked. I had colon cancer and mine was more advanced than my sister’s was.”

Within a week Terri ended up having surgery. After the surgery, the doctors said the cancer was in the lymphatic system, which made it stage 3 colon cancer. Terri’s sister’s cancer was stage 2.

“I had always said that I would never do chemo, and they told me that that was absolutely what I had to do. And I said, ‘Okay, let me go home and think about it.’ I started researching it. I watched Forks Over Knives. I watched Healing Cancer from the Inside Out. I called all my kids and said, ‘You know, I am just not going to do chemo. But I’m not ready to put the sheet over my head and lay down. I’m going to fight this in some way.’”

Terri decided to go whole-foods plant-based and do a lot of juicing.

“Everything I read that said it killed cancer cells, I did it. I sprouted broccoli everyday. I ate onions and garlic and a lot of raw food. My oncologist said I was a fool for not taking chemo. I said, ‘Well, that’s fine. In five years I’m going to prove to you that diet makes a difference.’ He said, ‘Diet doesn’t make a difference.’

The way I was healed was by food. My sister on the other hand, who was a nurse, she followed the doctor’s orders completely. She had four different episodes where it kept coming back. Four different surgeries, four different kinds of chemo, and she died in 2015. I have always felt that if it was a genetic component, food makes a difference.”

In 2010 Dan and Sheanne’s son came home and told them that he wanted to be a bodybuilder. He asked his mom to buy whey protein. Out of coincidence, Sheanne decided it needed to be researched before she gave it to her son. She googled and came across a video called, ‘The perils of dairy’ by Dr. John McDougall.

Sheanne: “I thought to myself, ‘Who is this crazy quack?’ But it was so fascinating to me that I was living in a parallel universe. That this information could be available to me and I knew nothing about it. I started to read and became obsessed. By 2011, I realized that I could no longer feed my family in the same manner. I decided that by April 1st, April Fool’s Day, we would do the whole-foods plant-based lifestyle. And I dragged my very upset family along with me.”

Over the next two years, Sheanne lost 133 pounds.

Sheanne: “I thought that was all the whole-foods plant-based diet had in store for us. I was back in my wedding dress. My husband and I were both healthier. I thought we were bullet-proof. That November I realized that was just the universe getting me ready for the fight of my life, because my husband was diagnosed with stage four kidney cancer.”

For Dan, it all started after a day of splitting firewood in November 2013. He had extreme abdominal pains that he’d been feeling all week, and decided to go to the emergency ward. Because kidney stones run in his family, Dan thought that’s what was happening.

Dan: “After doing the scans, the doctor ushered us into one of the waiting rooms, and within two sentences said, ‘It’s not kidney stones. Your right kidney is one massive tumor.’”

They told him that the only possible option was for him to be a guinea pig for one of the drug companies. After a few treatments of the drug, he had a liver attack and was dismissed from the trial.

Dan: “From there, I went into quick remission with three remaining lymph nodes shrinking. By that February, I was cancer-free.”

Adapting a plant-based lifestyle also helped Dan with his PTSD from his years of being a police officer.

This is the second part in a four part blog series about the Recovery Panel. Read the first part here.