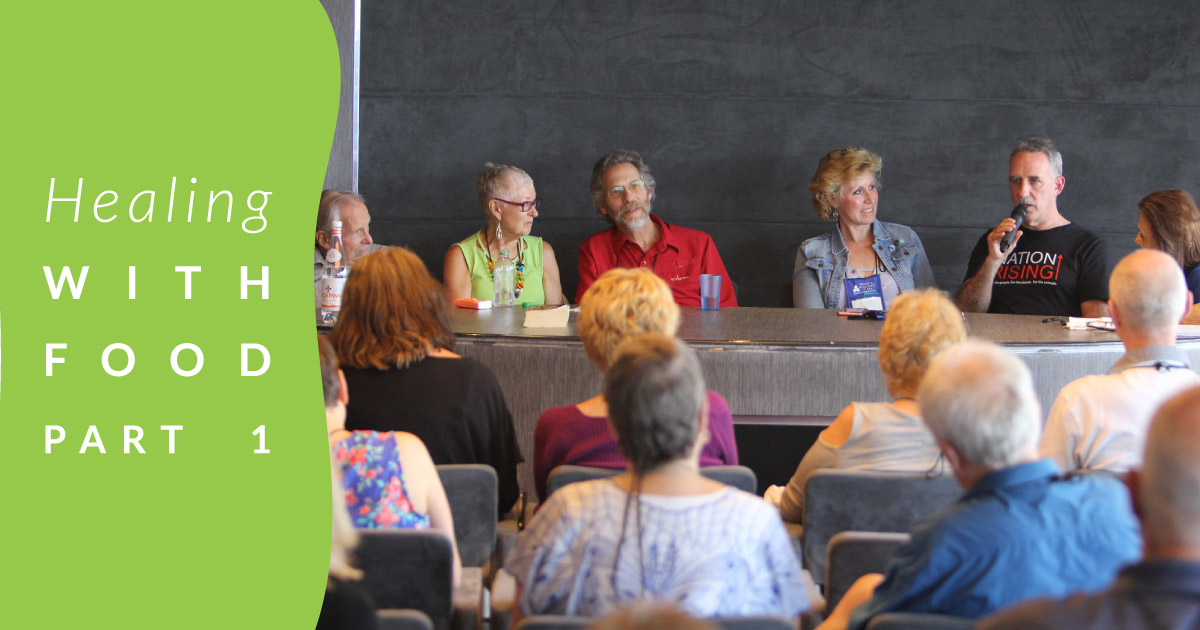 One of our most popular sessions on the Holistic Holiday at Sea each year is the Recovery Panel. With courage and grace, participants share personal stories of illness and health, and how a plant-based diet, macrobiotic lifestyle, and holistic wellness regimen contributed to their healing process. The stories are so inspiring that we wanted to share them far and wide! This is the first part of a four part series featuring the stories from the Recovery Panel.

Survived a growth between his bladder and spine

Around 30-40 years ago, Sheldon Rice attended his first macrobiotic dinner. After the dinner, Sheldon felt inspired.

“I woke up the next morning and said, ‘I’m macrobiotic!’ As time went on, I kept feeling better and better. But I had a problem with my bladder. This problem persisted. I kept saying, ‘But I feel better so I don’t have to do anything about it.’ I never went to a doctor. About a year and a half passed and I lost 70 pounds. Then I saw two of my toes turn black and that’s when I thought, ‘Well, maybe I better see a doctor.’”

When the doctors did a CAT scan, they found a growth between Sheldon’s bladder and spine. They arranged a biopsy and told Sheldon what the procedure would be like.

“It didn’t sound good so I started asking questions. The radiologist got angry with me because I was asking too many questions. I thought, ‘Well if she’s getting angry with me then to hell with the biopsy. I called my wife and said I don’t need this biopsy.’ At this point, I had been macrobiotic for so long. I had met and read about so many people who had cured themselves with a macrobiotic diet, and thought, why couldn’t I? So that’s what I did.”

In the beginning, Sheldon got tests to monitor what was happening. But every time he took a test, there was something else wrong. He told his doctor about his diet, but the doctor didn’t think anything of it. Sheldon decided to stop taking the tests. That was 30 years ago and he still hasn’t taken a test.

“Was it food? Yes, food is really, really important. But I did a whole bunch of other things. I changed my way of thinking. I changed my lifestyle. While I was in this healing mode I was always focused. I never thought about my cancer because it didn’t really matter to me how it was going to be. What mattered to me is now. How do I feel now? How do I feel today? And this is a very important point—staying in the now because when you’re thinking about, ‘Maybe I’ll heal. Maybe I won’t heal,’ then you start getting nervous and you start creating stress for yourself. Staying in the now really helped me.”

When Janet was a junior in high school, her father had a major heart attack. While it changed her family’s lives at home, at the time she didn’t think it had much to do with her medical future. Then, when she was 49, she experienced chest pain. They sent her for a nuclear stress test and the results were really alarming.

“Doctors told me that I had early onset coronary artery disease. That was when I started waking up and realizing I was following what had happened to my father. By age 50, I had blockages and ended up having two stents put in place. I went to cardiac rehab and did everything they told me to do, which was basically to eliminate fat from the diet and eat fat-free products.”

Over the next few years, Janet accumulated a lot of other disorders, and had to take more medications, and see more specialists. By the time she was 64, she suffered from high blood pressure, high cholesterol, severe asthma, severe sleep apnea, acid reflux, visual auras, and more.

When Janet was on vacation, she had an incident that sent her to the doctor. She had to get an emergency cath, which then resulted in an emergency bypass. The aftereffects were much more severe.

“They said that I had two or three days left to live prior to having that bypass and that I would have to have more bypasses until my life ended. It’s been seven years now since I changed to plant-based and I got rid of all the conditions I mentioned.”

After moving a tree that had fallen across the road, some “weird stuff” started going on in Jess’ body.

“All of a sudden I had some painless things going on. I want to emphasize painless. Pressure in my chest. Tingling down both arms. I thought about the exertion of having just removed that tree. And then I thought to myself, ‘Hey, I’m only 56 years old, I’m pretty fit. I’m pretty trim. I’ve been on a Mediterranean diet for 20 years. I just had a physical. I was told I was a model patient. Both my parents were alive and well in their 80s. This couldn’t be happening to me. I couldn’t be having a heart attack.’ But then, my breathing became irregular. I started feeling clammy. I decided I better call 911.”

When Jess got to the hospital, the doctors couldn’t find anything wrong with him. They were about to give up when they decided to do a cardiac cath. They found a near 100% blockage in the left anterior descending artery, a combination known as the ‘widow-maker.’ The doctors told Jess that if he would have driven himself to the hospital, he probably never would have arrived. He needed immediate open heart bypass sternal splitting surgery.

“I woke up two days later and was handed a cup full of pills. I said, ‘What are these?’ They said, ‘You’re going to be taking statins, blood thinners, beta-blockers, and god knows what else, for the rest of your life. You’re a heart patient now. Get used to it.’

That didn’t sit well with me because I didn’t like to take medications. I thought, ‘There’s gotta be a better thing here.’ I asked my doctors, ‘What’s going on here? How could this have happened to me?’ They said, ‘Oh, it’s idiopathic.’ (Cause unknown.) I said, ‘So what’s the prognosis?’ They said, ‘You’ll probably have to have stents every five to ten years. That’s just the way it is.’”

About a year and a half later, a progressive doctor introduced Jess to Caldwell Esselstyn. This changed Jess’ life completely. He switched to a plant-based diet and started to feel better immediately. He was also able to reduce his LDL cholesterol for the first time in his life.

“I had thought I was just one of those people who was predestined to have high LDL. As soon as I changed my diet, the LDL was sliced. I lost 35 pounds. I was able to get off all of my meds within a few months of switching to a plant-based diet. I’ve been plant-based now for almost nine years. There is no sign of heart disease in my body whatsoever.”

Judy was diagnosed with non-Hodgkin’s lymphoma stage 2, which went to stage 4.

“The hospital told me that I needed to be on chemotherapy. I said, ‘Well, I want to go home and think about that. I’m not sure that’s the way I wish to go.’ They told me it was the only way.”

She read ‘Love, Medicine and Miracles,’ by Bernie Siegal, MD and decided to find the author. She  went to his center to be around other women who had cancer and to see how to gain strength. In the library there she found a book about macrobiotics, ‘The Cancer Prevention Diet’ by Michio Kushi.

“When I opened up to the page that said non-Hodgkin’s lymphoma, it said I could be healed. There was the first possible idea that I could recover from this condition. So I brought the book home and was very excited to tell my husband that we were going to change our way of eating. I realized in my situation I needed to change my way of eating and being plant-based was really what made a difference, completely.”

“When I saw an X-ray after, I could see that the cancer was somewhat shrinking. The doctor said to me, ‘Do not get excited. You must understand that you have a terminal illness.’ At that point, I kept eating my macrobiotics. It got to a point where they said I would have to be on chemotherapy for the rest of my life. At that point I said, ‘I want to keep you as my doctors and I’ll come and have my check-ups once a month or whenever I need to be here, but I’m not doing any more chemotherapy. I’ve now been living a different way and eating different foods.’ They were very concerned and said, ‘You’re losing a lot of weight and that’s not going to work for you.’ Sure enough, it did work for me.

I kept going to see Bernie Siegal, MD and being a part of this wonderful group of women that were in the healing process too. What I found was that I did completely cure myself of cancer. The doctors just shook their heads and said they didn’t understand what I could have done that would make that so different. But here I am today and it’s been 29 years since I’m free of cancer.”

This is the first part in a four part blog series about the Recovery Panel.