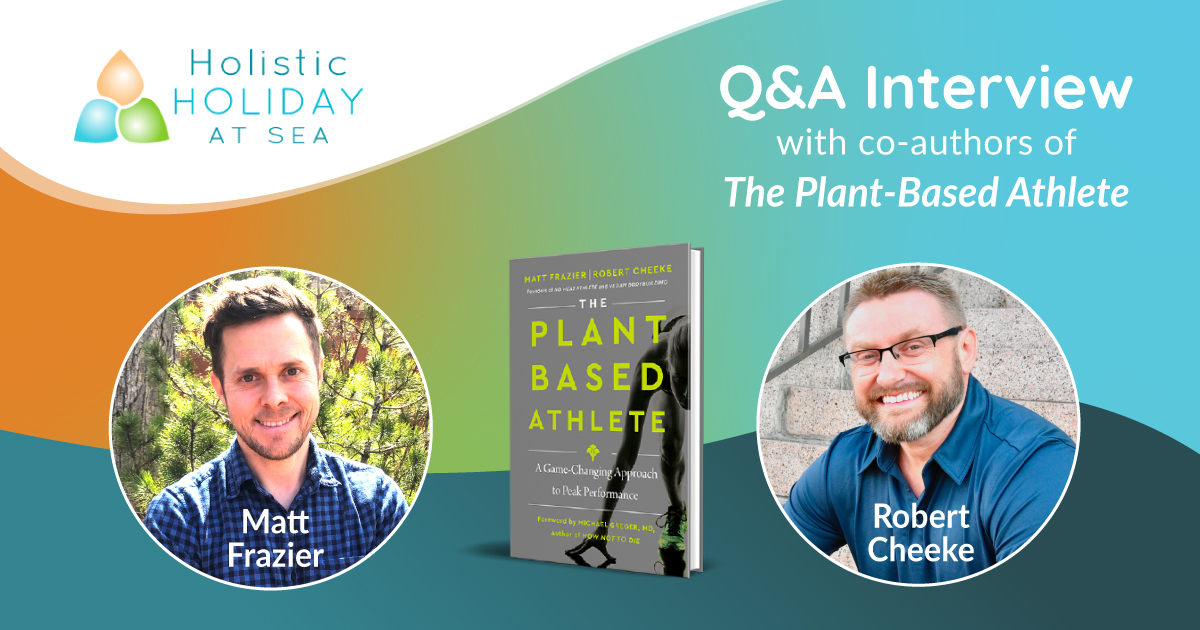 Holistic Holiday at Sea Vegan Cruise is pleased to share an exclusive interview with longtime cruise presenters, Robert Cheeke, founder of Vegan Bodybuilding & Fitness, and Matt Frazier, founder of No Meat Athlete, and co-author of The Plant-Based Athlete, a bestselling book in stores on June 15th. With endorsements from fellow cruise presenters and luminaries in the plant-based movement, such as Dr. T. Colin Campbell, Dr. Caldwell B. Esselstyn, Jr., Brenda Davis, RD, and Dr. Michael Greger, to name a few, we think you will find this exclusive interview to be insightful and educational. Please join us in supporting Robert and Matt by ordering their groundbreaking new book.

HHAS: Tell us about your exciting new book, The Plant-Based Athlete. There appear to be lots of vegan cruise speakers associated with the book. How did this book come about?

Robert: As a plant-based athlete of more than 25 years, I’ve had the goal for a long time to tell the stories of the world’s greatest plant-based athletes. I was so compelled to share these athlete stories in a major book that I flew across the country to meet up with my long-time friend and fellow HHAS speaker, Matt Frazier from No Meat Athlete, to ask him to join me in this quest. Having published multiple successful books already, Matt didn’t have aspirations of writing another book. Still, he was so excited about the idea of bringing these amazing stories to life that he enthusiastically agreed, on the spot, to co-author The Plant-Based Athlete.

As we pieced things together, we looked to our heroes in the movement for support. As a result, Dr. Michael Greger agreed to write the foreword. Dr. T. Colin Campbell, Dr. Caldwell B. Esselstyn, Jr., Brenda Davis, and others endorsed the book, and many presenters from the Vegan Cruise are featured with stories in the book, including Rip Esselstyn and Rich Roll. And even more presenters from the cruise have supported, promoted, and endorsed our new book, including HHAS founder Sandy Pukel, who has given us a platform to share our new book with all of you. For that, we’re incredibly grateful.

HHAS: In what ways does a whole-food, plant-based (WFPB) diet benefit people with an active lifestyle? Can non-athletes benefit from your new book too?

Matt: One of the beautiful things about a WFPB diet is that it improves health in so many individuals — primarily by helping to lower cholesterol, increase fiber and overall nutrient intake, and reduce arterial plaque, often resulting in better health biomarkers across the board. But it turns out that these same mechanisms by which a plant-based diet prevents long-term disease also serve to support the athletic performance of those who lead active lifestyles, from weekend warriors to dedicated fitness enthusiasts. So, as you improve your nutrient intake, you often improve your athletic recovery – everything from less inflammation and reduced soreness – to the ability to train harder, more often.

Though we’re athletes ourselves, and we wrote about dozens of amazing plant-based athletes in the book, The Plant-based Athlete is really for anyone who wants to live an active lifestyle and has the motivation or inclination to incorporate a plant-based diet into their lives. We believe that the plant-based diet is nearing a tipping point and that the mainstream audience is ready to embrace a book like this, and we’re excited to share it with the world. This book isn’t just about athlete stories, either; it’s a detailed “how-to” book covering plant-based nutrition, calorie density, nutrient density, protein, carbohydrates, fats, supplementation, meal plans, recipes, and so much more so that anyone who reads it can take their plant-based fitness game to the next level.

HHAS: You’re both now in your forties. Have you noticed a difference in energy or ability to recover after exercise?

Robert: I celebrated my 31st birthday on my first Holistic Holiday at Sea Vegan Cruise, and now that I’m 41, I’m the biggest and strongest I’ve ever been in my life, a quarter-century into my plant-based athlete lifestyle. My recovery –meaning how I feel after exercise, what my levels of soreness are like, how I build muscle as a result of my training, and how my body adapts to physical stress– seems to be better now than when I was younger and in the “prime” of my athletic career. That has been encouraging and makes me look forward to the years ahead.

The one area that seems to be harder to achieve results now than my younger years as an athlete is my ability to burn fat. That could simply be a natural result of aging, which people often report as they approach their forties, fifties, sixties, seventies, and beyond. Still, it might also be due to my lifestyle, which sees me spending inordinate amounts of time sitting in a computer chair writing books and doing interviews these days. Just a couple of years ago, I was a bit leaner because I was hiking three or four days per week, in addition to my weight training, but today, working to make this new book a bestseller, my non-gym time tends to be a bit more stationary. As my current state of Colorado experiences summer weather, my outdoor exercise should increase, perhaps similar to the workouts I’ve hosted on the Vegan Cruise for the past decade, and I am optimistic that a change in physical activity will jump-start my metabolism again, as I move into my mid-forties.

Overall, I feel as energized, strong, and confident as a plant-based athlete in my forties as I felt in my twenties, and I think that speaks to the longevity and viability of a plant-based diet. I’ve been sincerely inspired by the amazing speakers on the Vegan Cruise who make fitness a priority. I recall seeing Dr. Esselstyn in the gym on the ship the day he embarked, and seeing Dr. Campbell’s wife, Karen, not only in the gym but attending my fitness class. It was also inspirational. But perhaps my favorite example of walking her talk, leading by example, is Brenda Davis, who not only graciously endorsed our new book, but who has been a role model of mine for decades because of the positive example she sets.

HHAS: When it comes to supporting an active lifestyle with a WFPB diet, what are some of the best foods you recommend for energy, reducing inflammation, and for an overall feeling of well-being?

Matt: Since inflammation-reduction is largely the mechanism by which a plant-based benefits athletes, by shortening recovery time and helping to prevent injury, I always like to point out that even though we can talk about certain plant-based foods as being particularly anti-inflammatory, one of the very best reasons to eat a whole-food, plant-based diet is that almost all of it is anti-inflammatory, or at the very least doesn’t contribute the way animal products and processed foods increase inflammation in the body. Almost all of those fruits and vegetables that are the foundations of our diets serve to reduce inflammation, so you’re ahead of the game even before you add “superfoods.” With that being said, though, I’m a big believer that specific foods like ginger, turmeric, and tart cherries all deserve a spot in an athlete’s pre-and post-workout routine. I make it a point during periods of heavy training to really load up on leafy greens, too — they’re not just inflammatory but also rich in so many micronutrients that are so often overlooked by athletes who are so hung up on macronutrients (protein, carbohydrate, and fat).

HHAS: Where can we find more information about The Plant-Based Athlete?

Matt: As soon as the book is released on June 15th, it’ll be available in all major bookstores (online and off) in the U.S. and most independents, too, so look wherever you like to buy books. You can go to www.book.nomeatathlete.com to learn more about the book now, where you’ll see the details of a super-special package of bonuses that Robert and I put together just for people who order the book by Saturday, June 19th. You can still get the book from your favorite bookstore, but when you forward us your receipt, you’ll also get bonus meal plans, a live Q&amp;A session where you can ask Robert and me whatever you’d like, and even a couple more goodies. Get all those details at www.book.nomeatathlete.com.

ROBERT CHEEKE is the founder of Vegan Bodybuilding and is a two-time natural bodybuilding champion. He is the author of Shred It!, is a public speaker, and has followed a plant-based diet for more than twenty-five years. He lives in Fort Collins, CO, with his family.

MATT FRAZIER is the founder and CEO of No Meat Athlete and author of The No Meat Athlete Cookbook. He is a marathoner and ultrarunner and qualified for the Boston Marathon with the help of a plant-based diet. Matt is the host of the No Meat Athlete podcast. He lives in Asheville, NC, with his family.