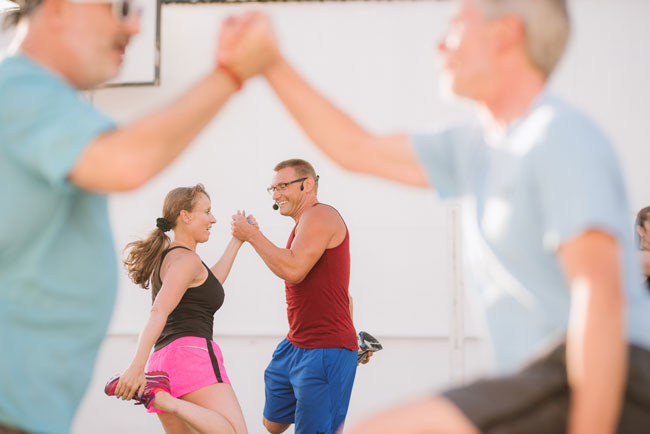 The science is compelling for a growing number of competitive and professional athletes: plant-based diets add vitality, energy, and that much needed edge in achieving performance goals. From football to soccer to weight lifting and marathon running, amateur fitness lovers and international pros alike from all over the sports world are choosing to leave animal foods off their plates in favor of nutrient dense plant-based proteins, and high-fiber, hydrating fruits and veggies.

Our 2019 cruise will feature some of the greatest plant-based thinkers, movers, and shakers. And here’s a deeper look at some of the “movers,” specifically, who will be aboard:

Rip Esselstyn is a former firefighter and triathlete. Rip was a three-time All-American swimmer at the University of Texas at Austin. His life’s work centers on helping people to understand the connection between nutrition and optimal health for everyone: athletes and non-athletes alike. His father, Caldwell Esselstyn, Jr., is also going to present during the 2019 cruise, and has greatly influenced Rip’s nutritional philosophy, as one of the country’s first medical doctors to promote a plant-based diet. Dr. Esselstyn is a former Olympic rower, so athleticism is as much a part of the Esselstyn family culture as is their love of the whole foods, plant-based diet.

Catch Rip on the 2019 voyage during his keynote address, “The Genesis of the Engine 2 Diet,” and lecture, “The Engine 2 Seven-Day Rescue Diet!”

James Aspey is a former personal trainer and a full time vegan activist. He credits his fitness regime (which includes sprints, resistance, and surfing) in part to his vegan diet, and notes that his fitness levels are easier to maintain since his switch to veganism. He loves fueling his workouts with vegan protein staples like lentils, tempeh, and tofu, and packs his diet full of calcium and iron rich foods like tahini and kale.

You can hear James speak throughout the upcoming cruise. He’ll give compelling lectures  titled “A Vow of Silence for the Animals,” and “Compassionate, Effective Vegan Advocacy” as well as appear on the panel discussion, “Animal Rights Leadership,” with animal rights advocates Dan Mathews, Dr. Will Tuttle and Dr. Jonathan Balcombe

Robert Cheeke is the best-selling author of the books Vegan Bodybuilding & Fitness – The Complete Guide to Building Your Body on a Plant-Based Diet and Shred It! – Your Step-by-Step Guide to Burning Fat and Building Muscle on a Whole-Food, Plant-Based Diet. He is a two-time natural bodybuilding champion, former cross-country runner for the University of Oregon, and multi-sport athlete. He credits his athletic success to his whole-foods, plant-based diet, consistency in training, and goal-oriented approach.

Robert can be seen aboard the Holistic Holiday at Sea lecturing on the topic of  “Exercise and Nutrition for Energy,” participating in the panel, ”Powered by Plants,” with fellow vegan athletes Giacomo Marchese, Dani Taylor, Angelica Kushi and “Fitness over Fifty” trainer Larry Krug. You also have the opportunity to take an inspiring fitness class led by Robert!

Matt Frazier is a vegan ultramarathoner. He is the author of No Meat Athlete and The No Meat Athlete Cookbook. Fitness is a huge part of Matt’s life in Asheville, North Carolina, where he and his vegan family live, run, and stay active. He believes that a plant-based diet makes people fitter, faster, and happier. He has helped others to lose weight, manage disease, and enjoy easier digestion and improved energy levels by utilizing a diet that excludes animal products and consists of fruits, vegetables, beans, and grains.

Don’t miss Matt present onboard during his talk, “Plant-Based Meal Planning for Health and Fitness: The 10 Foods Worth Eating Every Day,” and in the panel discussion, “Powered by Plants” with fellow vegan athletes.

Giacomo Marchese is a competitive powerlifter and bodybuilder, and a vegan of over ten years! He works as a professional coach. Giacomo travels to festivals across the globe to raise awareness for animal rights and welfare. He and his wife, Dani, co-founded VeganProteins, an online supplement store and coaching business. They also co-founded the largest and most diverse team of strength-based athletes in the world, Plantbuilt.

You’ll have the opportunity to workout with Giacomo during his fitness workshops, “Vegan Muscle Team, Boot Camp” and “Full Body Mobility and Flexibility.” He will also participate in the panel discussion entitled, “Powered by Plants” with fellow vegan athletes.

Dani Taylor credits her life transformation from a 208 lb teenager to a thriving, fit, and active adult to veganism. She understands and teaches the power of a nutrient dense, active lifestyle. Her businesses and fitness classes reflect her values and inspire everyday people facing their own challenges to transform in magnificent ways.

Want to train with Dani? She’ll be teaching 2 fitness classes onboard, “Women’s Boot Camp,” and “Better Posture 101.” She’s also available for one on one consultations and will be participating in the panel discussion, “Powered by Plants” with fellow vegan athletes.

Deepen your knowledge and athletic prowess by attending one or all our athlete presenters’ vegan fitness lectures, panels, and classes. And, why not transform your life with an inspiring one-on-one coaching session? In addition to these exciting programs, our voyage will offer Pilates, Zumba, and yoga taught by plant-based fitness professionals throughout each day of the voyage. You have everything you need to prioritize your health and fitness goals with this year’s Holistic Holiday at Sea experience!

With over 45 teachers and 175 classes, including fitness, lectures, mindfulness, and cooking demos, our next cruise is shaping up to be the best yet! Take a look at the newly released program and see for yourself. With so many amazing options, it’s no wonder that National Geographic Traveler calls Holistic Holiday at Sea “one of the 100 best worldwide vacations to enrich your life.” We can’t wait to welcome you aboard!