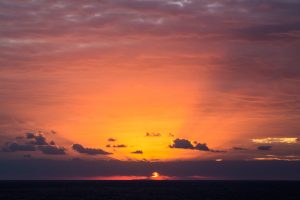 Each year, one of our most popular sessions on the ship is the Recovery Panel. With courage and grace, participants share personal stories of illness and health, and how a plant-based macrobiotic diet and holistic wellness regimen contributed to their success.

Macrobiotic teacher, counselor, and chef Jane Stanchich served as moderator for our 2018 panel. She started the session by explaining, “We consider the Recovery Panel as the heart and soul of the Holistic Holiday at Sea cruise.” Fifteen people had five minutes each to summarize their life experiences. Attendees were visibly moved by the end. Here are 15 nuggets of inspiration, wisdom, and advice from the participants that we hope will help you on your own path to optimal health.

It’s a joy to be able to heal with a plant-based diet and to avoid what for me was unnecessary surgery. Although we know that medicine and surgery can be miraculous as well. But let’s prevent when we can.

I shouldn’t be standing here. Most people die with a three- to four-second whiff of mustard gas. But I’m here and I thank God for it.

Survived a growth between bladder and spine.

During the time I was healing, all I could think about was wellness. I would get up every morning and I would focus on the now. I would go to work every day. I stopped being a victim. I stopped thinking, ‘Poor me.’ And I changed my whole lifestyle. I let go. Two important words in the English language. Letting go of crap. Things that you hold onto that you don’t really need. It took me a long time to figure it out. I never really understood just how much I let go and how important that was in my healing.

Survived aggressive lupus and diabetes, which put her in a wheelchair and on 26 medications.

What I can advise people is: be a pillar of positivity. Don’t judge people. We’re all on our own journey. Nutrition is a very personal journey.

Survived the “widow maker,” which is a heart attack in his lower anterior descending artery, and another heart scare that led to plantar fasciitis.

At that point, that’s when Caldwell Esselstyn came back into the picture. I started following his protocol: whole-foods, plant-based, no oil. All of a sudden, the weight started dropping off. I was 225. Today, I am 165. I dropped 60 pounds. And I had so much energy after this, that I couldn’t sleep at night.

I love being plant-based. People think I am very extreme because I don’t eat animal products, but I think that being in a wheelchair and not being able to walk is pretty extreme and I don’t want that extreme.

After major whiplash caused by a car accident left her permanently disabled, she was later diagnosed with a rare condition in her brain stem. Survived her ailments without surgery.

I went to that place. It was raw food, organic plant-based. I thought I got into a cult. I ended up staying there. I didn’t believe anything they said, but I did it anyway… Gradually got off all 18 drugs. Never had the surgery. I had to learn how to sit up, walk, and run. But it worked… Brain stem healed itself. I believe this could happen to everybody.

Survived after suffering from low testosterone, obesity, and a heart attack.

In May [2015], I had a heart attack. Everyone said, ‘You’re the healthiest person I know.’ Listen you guys, I was paying for past sins. The amazing thing was, I didn’t have a long recovery. They told me I’d be in the hospital for four days. After two days, they asked me if I wanted to go home.

I know that changing our diet is so important. The spiritual part of it is very huge. The family and love that is around you is such a gift. To be able to eat the nourishing foods and the plant-based foods is so important to us. Keep living your life and keep spreading the word because this is the answer to having a health body.

After stroke caused paralysis on the right side, she was diagnosed with a rare blood disease, Crohn’s disease, and an autoimmune condition. Survived all conditions.

As I have practice and journeyed through my health all these years (over 40 years now), I’ve learned that it doesn’t make you bulletproof because health is something you always have to work at, but it sure makes you resilient and this is what we see here on the panel today. As other problems have arisen for me healthwise, the fear isn’t there. It’s just information on how I need to adjust.

Son was in a near fatal car accident that left him with broken legs, tore ligaments in his feet, lung protrusions, and ripped fractures. He regained his health using a whole-foods, plant-based diet.

I’m finishing up to become nurse practitioner in holistic health. I would implore you to help me with my goal to restore health and hope around the world.

Survived Stage IV uterine cancer, which metastasized to both lungs.

We’ve got to go down last row of vendors and encountered a man selling wheatgrass. He looked directly at me and said, ‘If I had a serious health condition, I would go to the Optimum Health Institute in Lemon Grove. It’s a holistic healing center, mind body and spirit. Raw vegan diet, wheatgrass juice, meditation, spiritual activities.’ I went there, did the program in a very determined and sustained way. No cheats, shortcuts, or compromises, except for that one bag of family-sized Lay’s potato chips. My results? Unbelievable. Unbelievable what these lifestyle changes could do.

There are basically two things I tell people these days if they’re looking to make a change to their health, first one is start early. You can imagine that all the people I know who have been diagnosed with cancer. The ones with the best chance of success are the ones who integrate a plant-based lifestyle very early in the picture. Secondly, stick to it… ‘The price of freedom is eternal vigilance,’ and that’s how I live my life these days. It’s the reason why I still live how I live and eat how I eat because I can’t afford to go back to how my life used to be like because that’s the environment where cancer grew. Live in an environment where cancer can’t grow.

What I learned about the power of food was shocking to me. I knew that cabbage was good because I was forced to eat it as a kid, but I didn’t know the power that was really in food. That’s my message today: help people realize what’s in your hands. That’s why we need to support farmers who feed cities, do clean, and just keep the fight going to have a clean earth and avoid all that other crap out there. To be kind to each other and help, help, help, and everything comes back to you when you tend to do that.

So I guess I had no clue how this was going to change my life forever. It was definitely a blessing in disguise for sure. Through that, it gave me my passion. I had no idea what I wanted to do with my life. I had no passion. I had a whole lot of anger. All that stuff you have to work through when you’re going through this because you’re thinking to yourself, Why is this happening to me? It gave me that passion to help others. So that’s what I do.

Wheatgrass is really loaded with oxygen. A great detoxing agent and it has lots antioxidants. If you want to be young forever, drink wheatgrass. It’s so easy to grow. It’s like a Chia Pet.

The Recovery Panel is just one of many educational and motivational sessions we offer aboard the MSC Divina as we sail on the Caribbean. Wherever you are on your journey to wellness, we hope that you’ll join us on our 2019 cruise!