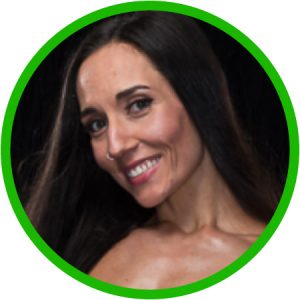 Dani Taylor was raised in a household that didn’t value a healthy lifestyle. Money was scarce and macaroni and cheese with hotdogs was a regular meal. Despite becoming a vegetarian at age twelve, Dani continued to become overweight, eventually reaching 210 pounds by age seventeen. While writing a research paper in high school, Dani stumbled upon veganism, and never looked back.

In the seventeen years since then, Dani has turned around her health completely.  She lost ninety pounds and went on to become a champion figure competitor and a full-time vegan bodybuilding coach.  She and her husband Giacomo started VeganProteins, an online vegan coaching hub, founded Team PlantBuilt, the world’s largest team of vegan strength athletes, and now tours the country with the Vegan Strong Team to promote a vegan fitness lifestyle.